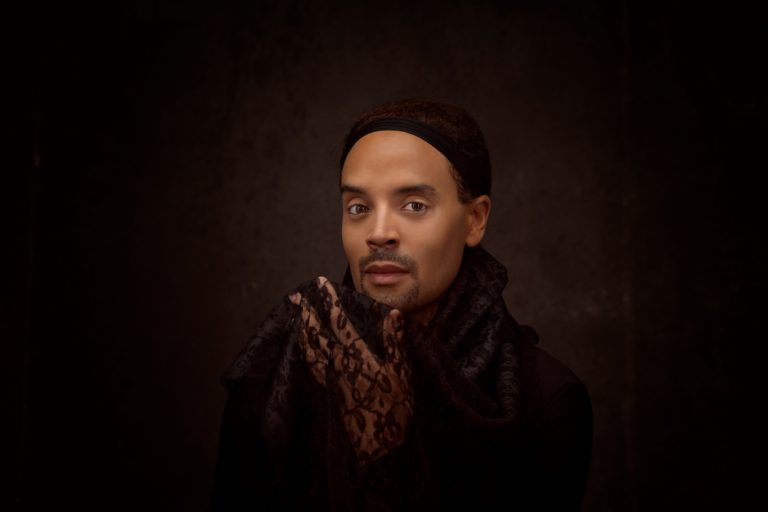 Often called the “Creole Farinelli”, Fabrice di Falco was born on the Island of Martinique and received his degree from the CNR of Boulogne-Billancourt where he was awarded First Prize by a unanimous vote.

The unique timbre of his voice with a male soprano/countertenor tessitura took him to sing for Her Majesty the Queen of Denmark at the Palace of Frednesbord in 2004 followed by many concerts in renowned international festivals in Germany, Russia, Sweden, Italy, Argentina, Africa, Rumania, Azerbaijan, Japan.

Since 2007, he regularly sings for His Majesty the Sultan Qaboos bin Said with the Orchestra of Oman. Musical critics praise Fabrice di Falco for the quality of his pure timbre and the eclecticism of his repertoire- from baroque to jazz, and even musical comedy. Fabrice di Falco has inspired the careers of several singers, namely the Counter-tenor Phillipe Jaroussky who confided to the New York Times that he had chosen his voice after hearing Fabrice di Falco in concert. In 2003 they worked together in a production of the opera “Agrippina” conducted by Jean-Claude Malgoire, which was also released on CD and DVD. With Eve Ruggeri, one of the most popular presenters of classical music on French TV by his side, Fabrice di Falco continues to participate in numerous festivals as well as the first Musical Cruise by the Radio Classique.

Fabrice di Falco also has a strong focus on contemporary music where he uses both his male soprano and his baritone voice. He sang in several world premieres creating roles like Fougère in Régis Campo’s opera “Les quatre Jumelles”, Dious in “Les Nègres” by Michael Lévinas, and Gregor Samsa in “La Métamorphose” also by Lévinas at the Opera of Lille in 2011.

One of the highlights of his opera appearances was the role of Oberon in Brittens “A Midsummer Night’s Dream” at the Nice Opera House and the Teatro Colón in Buenos Aires, directed by Paul Emile Fourny.
After having sung the Nègres by Lévinas in 2004 and “Upupa” by Henze in 2005 at the Opera of Lyon, he created in Lyon for the world creation of Thierry Escaich’s new opera

Last season , Fabrice di Falco sang the role of Gregor in Levinas ” La métamorphose”  and created  the world creation of Regis Campo and A midsummer night’s dream of Britten in Metz Oper and Dubaï Oper.

The new project of Fabrice di Falco ” Hommage from Castraties to Pop Stars ” with his di Falco Quartet had received  good critics after différents theaters like Vichy Oper,   thanks to the communion between Jean Rondeau harpsichordist /jazz pianist  and the counter-tenor  with Barock/Jazz/Pop .

Since 2016 di Falco is an exclusive artiste of Sony Classical and Jazz and he Will reçoive from Hollande Président the gradation of Chevalier of the légion of honor.