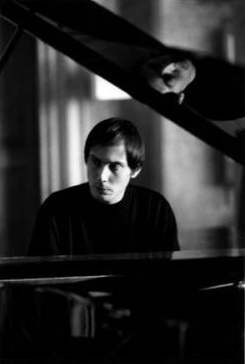 Born in Rome in 1975, Andrea Corazziari studied with Luisa De Robertis at the Conservatory “S. Cecilia”, Rome and received the piano diploma in 1995 and the chamber music diploma in 1997.

He studied four years at the piano Academy “Incontri col maestro” in Imola with Giovanni Valentini, Boris Petrushansky, Piernarciso Masi and Antonio Ballista and received the Academy diploma in June 2000 and the Master in chamber music in 2006. He participated to masterclasses with Alexander Lonquich, Arie Vardi, Louis Lortie, Riccardo Brengola and the Trio di Trieste.  He was granted a scholarship and honor diploma at the Accademia Chigiana in Siena in 1996 and 2005.

He has dedicated great part of his studies to contemporary piano music and he participated to several piano competitions with repertoire of the 20th century: prize “Sacem”, prize “Nadia Boulanger” and prize “André Chevillon-Yvonne Bonnaud” at the Orléans piano competition, February 2000 and first prize at the piano competition “Premio Bucchi”, Rome March 2000. With the pianist Paolo Cremonte he got the third prize at the “Bucchi” two- pianos competition in Rome, November 2003.

He played in several Italian and European cities receiving highly favorable comments for his performances: at the Berlin Konzerthaus, Maastricht Theatre, Milan Auditorium under the baton of Riccardo Chailly, Villa Medici in Rome, Victoria Hall in Génève, Salle Cortot and Louvre’s Auditorium in Paris, and for the “Roque d’Anthéron” piano festival, Festival Romaeuropa, etc. Some concerts will be broadcasted by the Italian, French and Swiss Radios. He collaborates with several Italian and foreigner composers: Stefano Gervasoni, Mauro Lanza, Lorenzo Pagliei , Fabien Lévy, Frédéric Verrières, Stefan Streich.

Andrea Corazziari has recorded a cd dedicated to Mussorgsky for the italian label “Kha” and he has engraved a new project about the contemporary studies for solo piano. Currently he collaborates with the baritone Bruno Taddia and he founded the “Duo Métamorphoses” with the french pianist Antoine Didry-Demarle.
Andrea Corazziari teach the piano and chamber music at the conservatoire “Nadia and Lili Boulanger” in Paris.