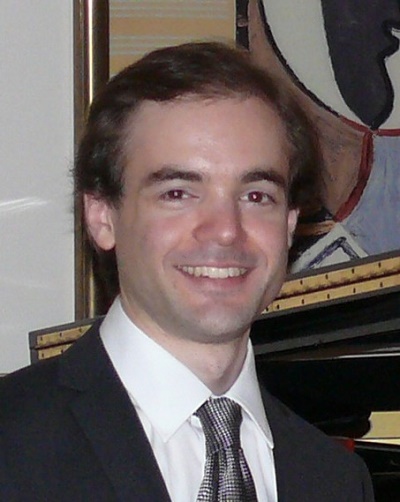 Born in 1984 in Louviers (in Normandy), François Henry initially had a variety of hobbies, such as creative writing and making collections, before devoting himself to the piano at the age of 13. After studying at the Conservatories of Versailles (where he obtained a gold medal unanimously with honours in 2003) and Boulogne-Billancourt (1st prize in 2005), he joined the National Conservatory of Music and Dance in Paris (Paris Conservatory) in Jean-François Heisser’s class. There he obtained the Diplôme de Formation Supérieure in piano, the Master of piano accompaniment, and qualified in analysis, harmony and counterpoint.
Winner of various competitions (1st prize unanimously at the international piano competition of the Ile de France in 2005, honorable mention at the European competition of Picardy in 2004 …), he engaged in the preparation of recitals, both as a soloist and chamber player, in France (Moulin d’Andé, Scots Kirk, Ile Saint-Louis Theatre, American Cathedral and Church, Saint-Merri church, Museum of Music in Paris …) and abroad (French Residence in Djeddah, Museum of Opole Silesia in Poland, Florence and Alba Festival in Italy) …
He devotes part of his performing mission to the rediscovery of unknown scores, and he is fascinated by vocal music, having realized an inventory of the different musical settings of poems by Théophile Gautier in order to develop a reflection on the connections between words and music. He is currently studying at the Paris Conservatory on the masters courses in vocal accompaniment.
He also has an affinity for playing historical instruments ; he has acquired six fortepianos or Romantic pianos, on which he plays for various projects with his Pianomuses music company.
As an accompainist, he accompains the Chœur Symphonique d’Ile de France, the conducting class of Adrian McDonnell at Schola Cantorum (in Paris), the instrumental and vocal classes of the Chantilly Conservatory, and different academies (Académie de Prades, Académie de Pâques, Académie de cuivres Epsival, Académie de Val d’Isère, Académie lyrique…)
In parallel he teaches the piano (for example at the Ecole de Musique du Centre Chopin), as he is convinced that the opportunities teaching given for reciprocity are essential to the continued development of his own artistic practise.