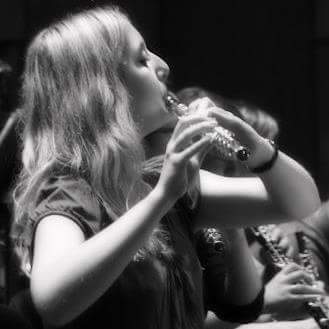 Charlotte Perez was born in 1992, and began the ﬂute at 8 years old. When she was 18, she is admitted to the “CRR de Paris” with Claude Lefebvre, and the next year, to Sophie Cherrier’s class at the “CNSM de Paris”. Very interrested by teaching and orchesra, she obtains her degree as ﬂute teacher in 2014, and plays with many orchestra like Orchestre de Paris, Opéra National de Lorraine, l’Orchestre Lamoureux, Star Pop Orchestra… She has joined some Orchestral academies, like the French Youth Orchesra (Ofj) during two years, the International Academy of Beziers Musikè, and the Intenational Academy of Santander(Spain). In 2014 she is admitted at the Musik Hochschule of Stuttgart (Germany) with Davide Formisano for one Erasmus year. In 2015, she gets two price, of the Fondation de France and the Fondation Meyer.