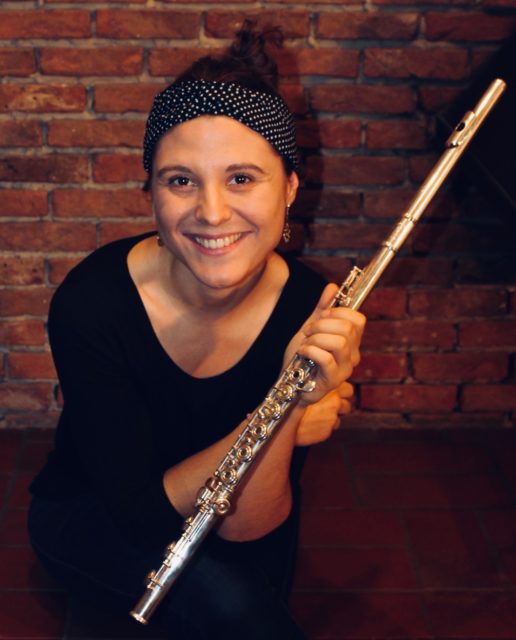 She continued her apprenticeship at the National Music School of Villeurbanne in the class of Sophie Dufeutrelle, with whom she unanimously obtained her Diploma of Musical Studies. She then entered at Brussels Royal Conservatory, in the class of Baudoin Giaux, Isabelle Bialek and Jérémie Fèvre. She came out in June 2018 with a Master Instrumental in flute with distinction. During her studies, Chloé perfected her instrumental apprenticeship at the Royal Irish Academy of Music in Dublin with William Dowdall during an Erasmus exchange. During her stay in Ireland, she obtained various prizes from the Ballymena Music Festival and won the 2017-2018 RTE NSO Mentoring session, a prize thanks to which she participated in various concerts of the RTE National Symphony Orchestra as academic flautist. In 2019, she obtained a Didactic Master from Mons Royal Conservatory with distinction.

Chloé perfected herself in parallel with Jocelyn Aubrun and Emmanuelle Reville, Wissam Boustany, Ian Clarke or Matthias Ziegler. With the latter, she obtains a Certificate of Advanced Studies from the Zürich Hochschule der Künste in 2020.

Twice winner of the Straubinger scholarships, Chloé has the opportunity to enrich her instrumental playing with Dr. Nevart Veron-Galileas, and works around contemporary chamber music creations with Dr. Yiorgos Vassilandonakis and Dr. Nikitas Demos, during from the 3rd and 4th Summer Music Performance Program at Anatolia College in Thessaloniki.

Passionate about chamber music, she collaborates with personalities such as Didier Puntos, Muhiddin Dürrüoglu, Igor Semenoff, Aymeric de Villoutreys, Romain Dhainaut, Fergus O’Carroll, Tim Carey and Gabriel Teclu. On the project side, Chloé collaborates with composers Stéphane Orlando, Nicolas Bacri, Jonathan Nangle and young composers from American universities such as Princeton, New Paltz or Charleston. In 2016, she co-created the Ensemble Elpénor, with which she participated in various festivals and concerts in Belgium. Likewise, Chloé has been performing in the orchestra La Chambre Symphonique since February 2018. That same year, she founded SPARKS Trio, with pianist Ana Popescu and cellist Camille Muller. In addition to the many concerts given in Belgium, this ensemble won the second prize of Mathilde Orlait-Dapsens chamber music competition in 2019. At the beginning of 2020, Chloé joined Post Tenebras Flûtes Geneva ensemble.

Her artistic curiosity led her to open up to improvised music : she was introduced to free improvisation with the musician Patrick Devers, and worked around “Son-Icones” with the artist Charlotte Hug. She takes part in numerous free improvisation concerts in Brussels and Zurich.

Eager to pass on her passion for music, Chloé has been teaching since 2019 at Dispositif Musical de La Jonchère-Orchestre à l’Ecole (Seynod-Annecy), and since 2020 at Mélôdia music school in Reignier-Esery. That same year, she began creating the educational musical tale Pipo l’oiseau, with harpist Elena Anger.